Laboratory of Molecular Biology and Immunobiotechnology

Head of the Laboratory

The LMBI focuses on the development of new biotechnological drugs and the functional studies of biomolecules and molecular targets for the diagnosis and therapeutic applications of human disease.

The production of the recombinant biomolecules (antigens, antibodies and peptides) is performed in heterologous expression systems (mammalian cells, bacteria, yeast).

The LMBI is the pioneering lab in Greece where the phage antibody technology has been applied for the isolation of human recombinant antibodies and humanization of monoclonal antibodies.

The research activity of the laboratory is focused on:

Tumour cell invasion and metastasis requires degradation of extracellular matrix components, which is mainly achieved by MMPs produced by stromal cells surrounding the tumour. MMP synthesis is stimulated by the extracellular matrix metalloproteinase inducer (EMMPRIN, or CD147), a 58 kDa surface glycoprotein of the immunoglobulin superfamily. EMMPRIN also participates in the induction of MMP production in tumour cells in an autocrine fashion. High level of EMMPRIN glycosylation is important for its activity and maturation process. Two types exist. The immature high mannose LG-EMMPRIN and the fully glycosylated mature HG-EMMPRIN that is considered to be the biological functional form. It is reported that both types could be detected on the plasma membrane and the HG/LG ratio is implicated in several physiological and pathological processes. The mechanism by which glycosylation enhances the oligomerisation of EMMPRIN is unknown.

The exact mechanism for the MMP inducing activity of EMMPRIN still remains unclear. Several contradictory observations exist, such as whether IgI loop is indeed responsible for this effect and if glycosylation is required or not. Our aim was to investigate (a) if the IgII loop domain of the extracellular domain (ECD) of EMMPRIN contributes to the MMP production by fibroblasts and (b) to evaluate the significance of glycosylation in this process. For this purpose, we expressed the ECD, IgI, or IgII domains of EMMPRIN, in glycosylated and non-glycosylated forms, in the heterologous expression systems of P. pastoris and E. coli, respectively. Treatment of dermal fibroblasts with purified recombinant domains were analysed by Western blot and zymography. Fibroblasts treated with ECD-, IgI-, and IgII-glycosylated domains of EMMPRIN significantly stimulated the gelatinolytic activity of MMP-2, compared to untreated fibroblasts, whereas no significant effect was observed with the non-glycosylated ECD, IgI, and IgII domains. Western blot analysis from cell extracts and supernatants revealed that only the glycosylated forms were able to stimulate MMP-2 production and secretion, respectively. This study showed that N-glycosylation was a prerequisite for efficient MMP-2 production, with the IgII loop domain contributing significantly to this process (publication: A. Papadimitropoulou & A. Mamalaki, 2013).

In our effort to isolate a human blocking Ab from a combinatorial Fab phage display library derived from invaded lymph nodes of a breast cancer patient, we used the recombinant glycosylated ECD domain. The isolated human Fab binds specifically the native EMMPRIN and more specifically the HG-EMMPRIN. The human Fab and the fully human mAb expressed in CHO cells are under investigation.

Glycosylation in liver is one of the most biologically important protein modifications. It plays critical roles in angiogenesis, liver cancer, cirrhosis, and fibrosis. Fully glycosylated EMMPRIN was found on plasma membrane in hepatoma tumour cells.  Hepatitis C virus (HCV) is one of the main causes of hepatocellular carcinoma (HCC). EMMPRIN could be used as biomarker of disease progression, during the progressive liver damage following HCV infection.

Hepcidin is a 25-aa cysteine-rich antimicrobial peptide hormone predominantly synthesised and secreted by hepatocytes, with a crucial role in systemic iron homeostasis. Hepcidin binds to ferroportin (FPN), the iron exporter in mammalian cells and promotes its internalisation and degradation. Under iron-replete conditions, high levels of hepcidin cause iron retention in iron storage cells and diminished duodenal absorption. When there is demand for iron (e.g. in haemopoiesis) hepcidin synthesis declines and absorbed or stored iron enters the circulation. Abnormally high serum hepcidin reduces iron plasma concentration and causes anaemia of chronic disease whereas, hepcidin deficiency leads to iron overload, as in hereditary haemochromatosis. Hepcidin can be regulated at the transcriptional level by different signalling pathways. Up-regulation of hepcidin under iron-replete hepatic conditions involves the BMP/SMAD-signalling pathway. Inflammation and infection can also stimulate hepcidin synthesis by hepatocytes through IL-6-induced activation of the STAT-3 signalling pathway. In contrast, anaemia and hypoxia, both of which necessitate erythropoiesis, suppress hepcidin by inhibiting the pathways mentioned above or by other poorly characterised mechanisms.

This work involves the production and characterisation of mAbs against hepcidin and production and purification of recombinant human Hep-25 without tag, in order to develop a more reliable immunoassay ELISA quantification of hepcidin in sera. Two strains of mice were immunised with several forms of hepcidin (KLH-LEAP-1, KLH-Hep25, Hep25 and Hep25-His in monomer form or aggregates), as it is known that hepcidin is an unstable and weakly immunogenic molecule. The results have shown important information about the immunogens and the antibody response of mice. IgG mAbs isolated were characterised by ELISA, dot blot and IP assays with recombinant peptides. IPs from human sera showed that 6 mAbs recognised the native hepcidin in monomeric form. Native hepcidin IP was confirmed by MS.

For the isolation of the recombinant Hep25 expressed in P.pastoris, an immunoaffinity column was prepared with these mAbs. Monomer isolation was performed by gel filtration Superdex peptide column. The function of the Hep25 was confirmed by its ability to endocytose ferroportin-GFP in the HEK293-Fpn cells. The development of a new ELISA is in progress. Hepcidin is an unstable molecule and by using these mAbs we were able to discern its antigenic characteristics and to investigate the storage conditions of isolated Hep25.

For evaluation of a therapeutic approach of anaemia we used mice with LPS-induced inflammation, where hepcidin expression is increased. Following the administration of mAbs, serum iron was elevated, whereas hepcidin was suppressed. We are in process to clone and humanise these mAbs.

We evaluated liver hepcidin gene expression, serum hepcidin levels and hepcidin/ferritin ratios in patients with diverse liver diseases, including for the first time patients with autoimmune liver disorders, and subsequently correlated these measurements with the clinical, histological and laboratory data of the patients. Hepatic hepcidin mRNA levels correlated positively with ferritin and negatively with serum γ-GT. However, no correlation was found between serum hepcidin and either ferritin or hepcidin mRNA. Both serum hepcidin and the serum hepcidin/ferritin ratio were significantly lower in AIH and PBC/PSC patients’ sera compared to HBV, HCV or NAFLD. PBC/PSC and AIH patients maintained low serum hepcidin during the course of their two-year long treatment (publication: Lymperopoulou et al., 2015).

According to our results (see below), we suspected that hepcidin increase may be more relevant to acute infection than chronic infection. Therefore, we determined hepcidin serum levels in acutely infected and chronic HCV patients. Half of the chronic patients had high and the other half low viral load. Hepcidin levels were elevated in acutely infected patients, but correlated with viral load in chronic patients (publication: Foka et al., 2016).

The correlation of patient groups with disorders in iron homeostasis was evaluated and is shown in the statistical chart below. Correlations with clinical data are in progress. 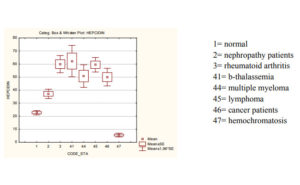 We investigated the effect of HCV core protein on HAMP gene expression and delineated the complex interplay of molecular mechanisms involved. HCV core up-regulated HAMP promoter activity, mRNA, and secreted protein. Enhanced promoter activity was abolished by co-transfections of core with HAMP promoter constructs containing mutated/deleted BMP and STAT binding sites. Dominant negative constructs, pharmacological inhibitors and silencing experiments against STAT3 and SMAD4 confirmed the participation of both pathways in HAMP gene regulation by core. STAT3 and SMAD4 expression levels were found increased in the presence of HCV core, which orchestrated SMAD4 translocation into the nucleus and STAT3 phosphorylation. To further understand the mechanisms governing the core effect, the role of the JAK/STAT activating kinase CK2 was investigated. A CK2-dominant negative construct, a CK2-specific inhibitor and RNAi interference abrogated the core-induced increase on HAMP promoter activity, mRNA, and protein levels, while CK2 acted in synergy with core to significantly enhance HAMP gene expression (Foka et al., 2014).

Mechanisms that favour HCV persistence over clearance are unclear, but involve defective innate immunity. We aimed to investigate interactions between HCV and hepcidin, during acute and chronic disease, and putative alterations in cellular iron homeostasis that enhance HCV propagation and promote viral persistence. HAMP expression was up-regulated early in HCV infection in vitro, with corresponding changes in ferritin and FPN. Hepcidin overexpression enhanced both viral translation and replication. In HCV-infected co-cultures, we observed increased hepcidin, reduced hepatoma ferritin and a concurrent rise in macrophaghic ferritin over time. Altered iron levels complemented amplified replication in hepatoma cells and one replication round in macrophages. Iron-loading of macrophages led to enhancement of hepatic HCV replication through reversed ferritin “flow”. Viral transmissibility from infected macrophages to naïve hepatoma cells was induced by iron. We propose that HCV control over iron occurs both by intracellular iron sequestration, through hepcidin, and intercellular iron mobilisation via ferritin, as means towards enhanced replication (Figure 2a). Persistence could be achieved through HCV-induced changes in macrophagic iron that enhances viral replication in these cells (publication: Foka et al., 2016).

• Action “KRIPIS” of the Operational Strategic Reference Framework, NSFR 2007-2013. Infectious and neurodegenerative diseases in the 21st century: study of basic mechanisms for the development of the translational research and cutting edge technologies aiming to effective diagnosis prevention and therapy Coordinator; E. Karagouni

Papadimitropoulou A, Mamalaki A. The glycosylated IgII extracellular domain of EMMPRIN is implicated in the induction of MMP-2. Mol Cell Biochem. 2013 Jul;379(1-2):107-13.

Research Director,
Head of the Laboratory of Molecular Biology and Immunobiotechnology
Tel: +30 210-6478838
Email:

The Hellenic Pasteur Institute is situated in close proximity
to the Athens
city centre. Its main entrance is in 127, Vassilissis Sofias Avenue, and its secondary entrance in Athanassiadou street.
It is easily accessible by metro, through the Ampelokipi station of line 3 (blue line).